The Twelve (novel)
Edit This Page 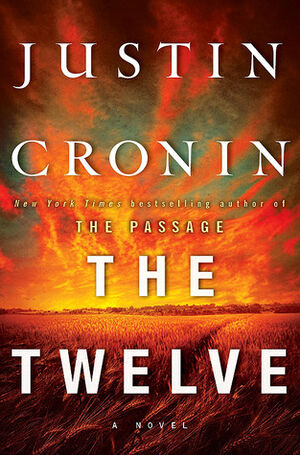 The Twelve is a 2012 horror novel by Justin Cronin and is the second novel in The Passage trilogy, following the novel The Passage. The Twelve was published on October 16, 2012 by Ballantine Books. The trilogy will be concluded with the publishing of The City of Mirrors, which is due to be released 2014. The Twelve has been optioned by director Ridley Scott along with the other two books in the trilogy for a planned series of film adaptations.

After briefly revisiting some of the surviving characters from the first book, the novel jumps back to the start of the plague. Four plot lines emerge: an autistic young school bus driver named Danny decides to take his bus on his rounds one more time, a military sniper named Kittridge holes up on a high floor of a Denver apartment building and begins shooting virals, Lawrence Grey; a janitor from the complex that Project Noah began in wakes up in a hotel only to find himself younger and slimmer than he used to be and Horace Guilder (a dying federal government functionary) copes with the country falling apart around him.

Danny happens across two children, 18 year old April Donadio and Tim, her younger stepbrother, and picks them up. Meanwhile, Grey encounters a disoriented pregnant woman that does not realize the dissolution of society around her, Lila Beatrice Kyle, whom is also Brad Wolgast's divorced wife, shopping for paint for her baby's bedroom in an abandoned Home Depot. Subsequently, Grey is misunderstood as one of the workers, and ends up helping Lila to paint her house, a bond forged between the two of them. Danny and company drive to a stadium outside of Denver that was designated as a rescue site, only to discover it full of thousands of dead bodies. Soonafter, Danny and April meet Kittridge, who successfully escaped the virals and military at Denver. After travelling several miles together, they stumble upon a FEMA semitrailer that is full of survivors. Grey (who is being tracked by satellite) and Kyle are captured by Guilder and taken to a research center. Kittridge and company, with the help of Major Frances Porcheki arrive at a refugee site just outside the research center. It emerges that the government is expecting the virals to attack the refugee camp and, rather than moving the refugees, is going to wait until that happens and then bomb it. Danny and April escape in the bus, but Kittridge and Tim do not, as they are killed by the bomb. Grey manages to escape after apparently killing Suresh, a medical examiner, and Nelson, then takes Guilder hostage. As Grey, Guilder and Lila try to escape in a helicopter, the bombs fall and the helicopter crashes. Guilder knocks Grey out with a chunk of concrete.

The story skips forward 75 years to about 15 years before the time of the body of the first book. A group of families, including the Vorhees family, Curtis Vorhees (later known as General Vorhees, aforementioned in The Passage), Dee Vorhees, who is his wife, and their two daughters, set out to a field for a picnic. They are also joined by Nathan Crukshank and Tifty Lamont, who are childhood friends of both Curtis and Dee. As the families have their picnic, secure in the knowledge that it's a bright day, as virals often avoid daylight, and go out for day of picnicking, the men sweep the nearby fields for any signs of virals. It is shown that Curtis despises Tifty's presence, claiming that Tifty was responsible for his brother's death, Boz Vorhees. The plot then returns back to when Curtis, Dee, Cruk, Boz and Tifty were just children. As the gang meets Tifty, Tifty claims that he has seen the legendary Colonel Niles Coffee, and convinces the children to follow him to Colonel Coffee's camp nearby. By midnight, they travel to the camp by an underground waterway, and Tifty, being the leader, sees water rushing through the vents and yells for them to run away. Unfortunately, Boz is killed as he is crushed against the bars by the water current, since then scarring Curtis. The story returns to the present, as the men are sweeping the fields. There are secure, hardened steel shelters nearby, known as hardboxes, in which offers protection and shelter if any virals would attack. Late in the day, a solar eclipse occurs. Virals pour out of the shelters where they had been hiding in and massacre the families, killing Dee. Among the virals is a seemingly human woman who is able to hypnotize some of the children and spirit them away.

The story skips forward another 20 years to about 5 years after the time of the first book. Amy is working in an orphanage in the military base. Later at night, Amy has a dream in which Wolgast appears; Wolgast gives Amy a cryptic message to find and go to "him" when the time is right. Peter Jaxon has joined the Expeditionary, and is a decorated veteran. It is said that Theo Jaxon, Mausami, and seemingly Sara, were killed in the Roswell Massacre of the first book. Satch Dodd, the youngest survivor of the Massacre of The Field, in which his whole family was murdered, joins Peter at the mess hall. Alicia Donadio has tracked down the home base of Julio Martinez, one of the Twelve, and leads an operation only to find him gone and only his familiar, Ignacio, who is also a janitor from Project Noah left behind. Satch is killed by bats in a tunnel. They have been trying to find the remaining 11 members of The Twelve for five years with no success and it's clear that the government is going to stop.

Peter is assigned to guard an oil delivery. He encounters Michael and his girlfriend Lore. On the way back with a convoy of fuel, they encounter the hypnotic woman from the field along with a group of virals. Peter is immune to her powers, much to her surprise, and the ambush goes poorly for both parties when one of the convoy members explodes a fuel truck. Peter, Michael and Lore escape as does the woman.

Meanwhile, Alicia discovers a large city in Iowa and decides to investigate further. The city is run by Guilder, who is surviving along with Lila Kyle (revealed to be the hypnotic woman) by draining blood from Grey, who has been chained in a basement for 100 years. Despite this, Grey is quite sane and lucid. Kyle is in a delusional state and Guilder is not much better. In the city is Sara, who survived the first book after all. However, she lost the baby she was pregnant with and is now serving in a concentration camp with the lower classes of the city. The city is run by "redeyes", who are fed blood from Grey to keep young and healthy and "cols" (collaborators) who serve as cruel enforcers.

Sara's death is faked by a resistance group led by a fictional leader "Sergio". The real leaders are a soldier named Eustace and a woman named Nina. Sara is renamed "Dani" and snuck into the capital building as a new assistant to Kyle. Here she discovers that her daughter, whom she thought was dead, was in fact presented to Kyle as her own daughter as a prop for her delusions.

Meanwhile, back at the military city in Texas, Amy and and an imprisoned former Colonel Greer escape and head to Iowa. Peter, Michael, Lore, Hollis (Sara's boyfriend from the first book) and a black marketeer named Tifty who was at the massacre of the field head out to Iowa close behind.

Alicia, unable to stand idly by, is captured by the Iowans and brutally tortured and raped before escaping.

In Iowa, it turns out that Guilder is preparing a site for all of the 11 master virals to stay permanently. They arrive, including Carter who is much smaller than the rest. All of the parties from outside find each other (Amy, Alicia, Peter and their groups). They find Nina from the Iowan resistance and form a plan. Amy will present herself as "Sergio" and when Guilder holds an elaborate execution and brings the entire town to watch, the resistance will be able to strike.

Meanwhile, Lila becomes coherent for the first time in 100 years, gives Sara her daughter and goes to the basement to find Grey. Instead of releasing him, though, she lights the massive ether supplies she finds, destroying the capital building.

Meanwhile, at the execution, Amy is confronted with the remaining 11 master virals. A massive fight erupts where it is revealed that Carter isn't actually Carter, but Wolgast. Wolgast manages to explode a bomb killing all the master virals and himself. Amy turns into a viral herself and leaves, leaving the others unsure whether she is alive or dead. She appears in a brief scene with Peter after he leaves the Homeland, her transformation complete.

Amy visits Carter in his mind and they both prepare to wait for Zero, the first of all the virals, to come for them. Zero calls to Alicia to come join him, but Alicia replies that she will come, but only to kill him.