The Passage (novel)
Edit This Page 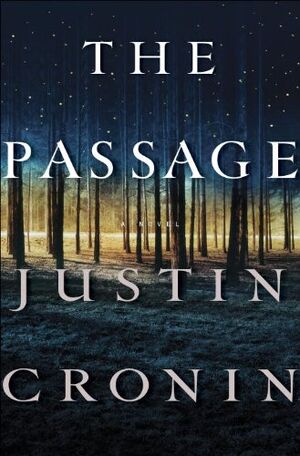 The Passage is a novel by Justin Cronin, published in 2010 by Ballantine Books, a division of Random House, Inc., New York. The Passage debuted at #3 on the New York Times hardcover fiction best seller list, and remained on the list seven additional weeks. It is the first novel of a trilogy; the second book, The Twelve, was released October 16, 2012, and the third book, The City of Mirrors, was released May 24, 2014.

The Passage begins in the near future and details an apocalyptic and, later, post-apocalyptic world that is overrun by vampire-like beings who are infected by a highly contagious virus. What begins as a project to develop a new immunity-boosting drug based on a virus carried by an unnamed species of bat in South America eventually becomes the virus that transforms the world. The novel begins in 2014 and spans more than ninety years, as colonies of humans attempt to live in a world filled with superhuman creatures who are continually on the hunt for fresh blood.

Cronin first began developing his ideas for The Passage in 2006 when his daughter asked him to write a book about a "girl who saves the world." He set out to write a book that combined elements of multiple genres, most predominantly horror, science fiction, and fantasy. Cronin wanted his vampiric creatures to seem like real-world organisms that might have inspired the vampire stories he knew from his childhood and the vampire-like creatures found in the folklore of numerous cultures. Cronin described writing the book as feeling "natural", and having come "very quickly". Cronin said that the title is a reference to the characters' journeys, and the journey "from life to death". Cronin said that many of the places featured in the novel were selected because they were places he had lived, and that he decided to "travel every mile my characters did, in order to capture not only the details of place, but the feeling of place."

The Passage has received generally positive reviews, receiving a 77% score from the review aggregator "The Lit Review". The National Post called The Passage "Homeric" and "one of the creepiest books of 2010". The book has earned comparisons to The Stand, and earned Cronin comparisons to Michael Crichton. Publishers Weeklycriticized Cronin's use of certain "tropes" of the genre, but added that "he manages to engage the reader with a sweeping epic style." Booklist said that the book was so similar to The Stand that it "required some fact-checking to ascertain it was not written under a new King pseudonym." USA Today said that The Passage "could be the best book of the summer." The New York Times Book Review said that The Passage is "A blockbuster…astutely plotted and imaginative". The Los Angeles Times said The Passage is "as stirring as it is epic", and even described a portion of the book as "nearly flawless", though it also describes some of the narration as "portentous and slack". The San Francisco Chronicle selected The Passage as one of the best science fiction and fantasy books of 2010, and describes the book as being "action packed" and "rousing".

The book has also been praised by numerous contemporary authors. Stephen King called The Passage"enthralling", and said that "It has the vividness that only epic works of fantasy and imagination can achieve." Dan Chaon called The Passage "hypnotic" and said that "you can’t turn the pages fast enough, and yet... you don’t want it to end." Jennifer Egan said that "Justin Cronin has written a wild, headlong, sweeping extravaganza of a novel. The Passage is the literary equivalent of a unicorn: a bonafide thriller that is sharply written, deeply humane, ablaze with big ideas, and absolutely impossible to put down." Danielle Trussoni called The Passage a "sweeping dystopian epic".

The novel is broken into eleven parts of varying lengths. The story itself is broken into two sections. The first and shorter section covers the origins of the virus and its outbreak, while the second is set 93 years after the infections, primarily following a colony of survivors living in California. Several narrative devices are used, including email, journal entries, newspaper reports, and other documents. Occasional use is made of reference material from 1,000 years after the outbreak, coming from The Journal of Sara Fisher, sourced from a future "University of New South Wales, Indo-Australian Republic".

The U.S. government is conducting a top secret experiment referred to as "Project Noah," which involves acquiring and transporting death row inmates to a secret military compound in Colorado for the purposes of modifying them into super-soldiers for the U.S. Army. These genetic experiments originate from "Patient Zero," Fanning — one of only four surviving members of an expedition investigating a Bolivian bat-transmitted virus. The virus, while eventually causing hemorrhagic fever and death in initial subjects, is being refined to accentuate its other properties – improved immune function and enhanced strength and agility.

The FBI agents responsible for recruiting the prisoners are ordered to collect six-year-old Amy Bellafonte from a convent, and, although conflicted, deliver her to Dr. Lear, the head of the project. At Noah she is exposed to a refined version of the serum administered to The Twelve – the original inmates. Lear theorizes that as Amy's immune system has not had chance to mature, it will form a symbiosis with the virus and live with her sympathetically, instead of the violent forms it has taken with the other twelve.

Of the inmates, the first and last recruited are depicted as being different from the others. Babcock, the original test subject, is stronger and appears to have developed psychic abilities, occasionally influencing his guards and cleaners. Carter is in fact innocent, but was convicted of first-degree murder nonetheless.

Zero (AKA Fanning) and the other twelve inmates mentally take control of their guards and escape their quarantine cells, rapidly killing all who stand in their way. Amy is rescued by Brad Wolgast (the FBI agent who brought her to the Chalet), his partner Phil Doyle, and Sister Lacey, the nun who was looking after Amy when she was taken for Project Noah. Doyle is killed by a viral, and Lacey is taken by Carter as Wolgast and Amy escape to a mountain retreat where they live for several months, occasionally picking up news of the contagion spread throughout America. The rest of the world's fate is not stated, but it is mentioned that most of Europe has imposed quarantine over travel.

Despite living reasonably comfortably in the mountain site, Wolgast eventually succumbs to radiation sickness when a nuclear device is detonated relatively nearby—he assumes that the government is attempting to sterilize infected areas of the country—and Amy is left to fend for herself.

The novel shifts forward in time approximately 93 years (with occasional reference retrospectively 1,000 years in the future), and the narrative is taken up around a self-sufficient and isolationist colony established by the military (specifically FEMA) not long after the initial outbreak. The colony is in slow decline, although only one character (a technician named Michael) seems to recognize this. Michael is trying to establish clandestine contact with the outside world to obtain spares for their failing equipment—specifically the batteries which power the high-wattage lights which protect the colony from the virals, who in traditional vampiric style are highly light-sensitive.

During a nighttime attack, Amy arrives at the gates of the camp, having previously met Peter Jaxon (one of the colony's senior figures) during a foraging expedition. Amy's arrival also results in a break-in from the virals leading to the death of Teacher—the woman responsible for the upbringing of all the children under eight in the colony. Amy now appears to be a fifteen year old girl, and upon her arrival is grievously wounded by a crossbow, but her own recuperative powers soon heal her and within days she is as healthy as she was before being injured.

Amy's arrival, her healing abilities, Teacher's death and inner-colony friction (caused by Babcock's mental influence over several Colony figures) force several of the colony dwellers to abscond with Amy and seek out another military site in Colorado, from where Michael has been receiving faint radio signals.

Amy demonstrates a psychic bond with the virals, and manages to keep the group of travelers relatively safe during their journey. They come across another settlement established in a Las Vegas prison, known as the Haven, which, while initially welcoming, is in fact Babcock's lair. The Haven "feeds" Babcock blood sacrifices in exchange for being left alone by the horde of virals at his disposal, referred to as "The Many" (as opposed to The Twelve).

During a botched attempt to kill Babcock during one of the blood sacrifice rituals, sympathizers at the Haven enable the group to escape via railroad, and they meet up with a Texan military group, who assist them in finding the Colorado outpost. Once at the outpost, they discover that it is the same compound where the outbreak started, and still serves as home to Sister Lacey. Lacey, like Amy, was treated by Lear with a modified form of the serum, providing her with longer life and a psychic bond with not only Amy and the virals, but Babcock as well.

It is decided to lure Babcock into the outpost—Amy and Lacey confirm that he is headed towards them in any case—where they will detonate a nuclear device, originally designed to sterilize the compound but never used. The group theorize that the virals are like a hive mind and that once Babcock is dead, his hold over the virals created exponentially by him will cease and they will no longer be a threat. While waiting for Babcock to arrive, the group is attacked. Alicia ("Lish") becomes infected, and is treated by Sara the medic with modified serum. Lacey hands over files on The Twelve, revealing their hometowns, to which she suggests The Twelve will have returned.

Upon Babcock's arrival, Lacey lures him to a chamber where she detonates the bomb, destroying herself, Babcock, and much of the outpost. The attacking virals all collapse and die again, in most cases leaving behind nothing but dust, proving the hive theory correct.

Lish adapts to the virus in a similar manner to Amy and Lacey before her, yet with differences—she has limited psychic abilities, but has the strength and endurance of a viral. Greer, one of the Texan soldiers traveling with them, comments that she would be a formidable soldier—suggesting that Lish has become the first true "super soldier" that the government had tried to develop 93 years ago.

Part of the group—primarily Amy, Peter, and Lish—return to the First Colony only to find it deserted, with no sign of what happened or where the colonists may have gone. There are two bodies, a victim of a suicide and that of Auntie, who seemingly died of old age. They decide to hunt down the remaining Twelve, using Lear's files to determine their locations and Lish as their primary weapon. That night Amy meets the infected Wolgast, outside the Colony.

The other group stays with the Texan Expeditionary force, and their remaining story is related through parts of Sara's diary. Her last entry is at Roswell Base, and among comments about her own pregnancy she states that she can hear gunshots, and is going to investigate. This entry is presented as part of the future reference material, and is stated to have come from the site of "The Roswell Massacre". The novel ends ambiguously for all surviving characters.